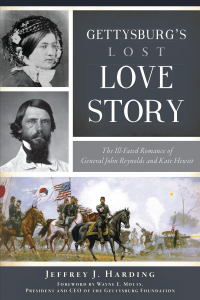 As some of you will recall, I did some research for Historian Jeff Harding awhile ago that resulted in some never before discovered details about the fiance of General John Reynolds. We had an article in “Civil War” magazine before Jeff decided that this story needed a book. You can read my first post about the discoveries here: Genealogy Research Helps Solve a Civil War Mystery

He’s been working on it over the last couple of years and it will be released on February 7, 2022! Here is the short blurb….

Union general John Reynolds was one of the most beloved and respected military leaders of the Civil War, yet beyond the battlefield, the captivating true story of his secret romance with Catherine “Kate” Mary Hewitt remains etched into his legacy. Clandestinely engaged before John marched off to war, the couple’s love remained a secret. Kate made a poignant “last promise,” a commitment to enter into a religious life if her beloved were to be killed. Tragically, Reynolds lost his life leading troops into action during the opening phases of the Battle of Gettysburg. Within days Kate was embraced by the Reynolds family and soon began to honor her promise of a religious life. Yet a few years later she seemed to disappear. Author Jeffrey J. Harding unveils new findings on Kate’s life before and after John’s death as he recounts Gettysburg’s saga of star-crossed love.

The story has the typical topics that will interest Civil War buffs, however, as a researcher, I was captivated by what we learned about the mysterious Kate Hewitt. Her history is a complex story of a woman doing what she has to do to survive. I find it sad that for so many years the “wrong Kate Hewitt” was given all the credit. The real Kate Hewitt led a much more interesting life both before she met John Reynolds and after his death! I’d also like to add, that as a genealogist, the mix up with another woman of the same name and from the same state makes for a good lesson in not jumping to conclusions without double checking the facts. The original researchers did not have access to some of the online resources that we had, so it’s understandable that they assumed that the Kate Hewitt living in upstate New York was probably the lost fiance. It still stands as a reminder not to make assumptions based just on name and location.

If you are interested, you can pre-order from all three direct links to the book listed below. You may or may not see my name mentioned in the Acknowledgements and a couple of the blurbs in the book: