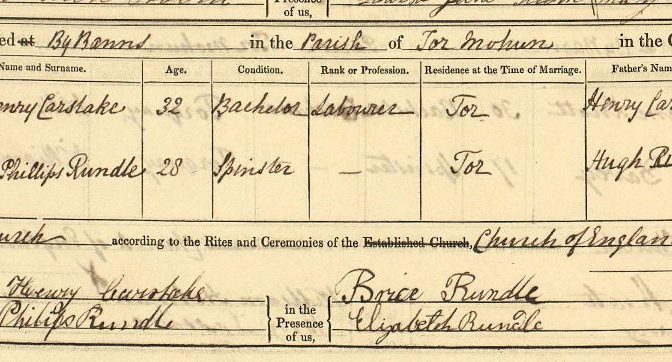 We then know via census and death records that Maria Phillips Rundle Short stayed in England and died in Fowey in 1888.

When looking at my data I realized that I didn’t have any info past her baptism for Maria Rundle, the daughter of Hugh Brice Rundle and Eleanor Lobb. The puzzle was that I had never seen any indication that her middle name was Phillips.

Up until then, the only marriage record that had been found for Maria Rundle and John Carslake was the Civil Registration. That didn’t give any identifying information other than that she was listed as “Maria Phillips Rundle”. After a little more research, I was able to find the church record for the marriage and all questions were answered.

Maria Phillips Rundle, who married John Henry Carslake in Devon in 1848, was listed as being the daughter of Hugh Rundle, farmer. The witnesses were Brice and Elizabeth Rundle. This was Maria’s brother Brice and his wife who lived in Devon.

That allowed me, with the help fo the Carslake researcher to fill out the rest of Maria Rundle’s life and descendants in South Australia.

This did of course, as all genealogy research does, bring up a new question: Why did two brothers, Hugh Brice and Jeremiah Brice Rundle, each name a daughter with the middle name of Phillips? I have most of the ancestors of Hugh and Jeremiah pretty far back and haven’t found a Phillips in the lot!! Any suggestions appreciated!

Click link below to open pdf file of rough draft report of:

If you  have any questions about the Rundles family, contact me at mpitkin (at) live.com  ~mary