I had done some preliminary research on my the family of my Great Great Grandmother, Dora Keen Wardell, a while ago. I found her and her mother and sisters in the 1841 Census in England. That info enabled me to figure out that they were from Broughton Gifford, Wiltshire.

Keen is a very common name in that area of Wiltshire, and to compound the difficulties of research in the 18th century, the families weren’t very unique when it came to first names. 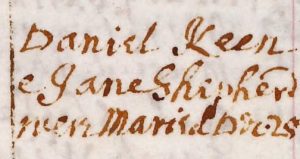 I am very confident that my Great Great Grandmother’s grandfather was a William Keen of Broughton Gifford. I am fairly confident that I know who is parents are, however, at this point I can’t be 100% sure. There were a few William Keens born about the same time in Broughton Gifford. Two of those are possibilities. A third William Keen who was the son of Daniel Keen and his first wife, Jane Shepherd, is the one that I am pretty sure is my ancestor.

I had been working on compiling as much data as I could for all of the Keen families in Broughton Gifford and attempting to connect them either to my family or others, when I found that I had a DNA match with a descendant of a Samuel Keen from Broughton Gifford.

These two DNA matches convinces me that I am correct in assuming that my William descends from Daniel Keen Jr in Broughton Gifford. That ties together the two reports that I link to below.

The Samuel Keen with whom I have a DNA match was born c. 1805 in Wiltshire, England. He was sent to New South Wales, Australia as a convict in 1826. His trial was on 4 March 1826. On one record in Australia he is listed as “alias Gay”. He was sentenced to life. In 1842 he was granted a pardon.

That makes the best option for parents of Thomas to be the son of Hammond Keen and his wife Mary Bull. Hammond was the half sibling of the William Keen that I believe to be my ancestor. That strengthens my belief in the connection back to Daniel Keen since it would coincide with the DNA match I have with a descendant of Thomas’ son, Samuel.

I’m hoping to make some other DNA matches that will help to cement the connection between these two families. At that point I will make a formal pdf report. The area around Broughton Gifford was a center for home weavers, a trade that most of the Keen families participated in. It’s been interesting collecting information on the history of the area and I will include that in my final report.